The rumors surrounding the release of the HTC Incredible and the Nexus One surface continuously with new dates, new circumstances, and new possible reasons as to why a certain date will be used for their launch.

I wrote a few hours ago about the possible launch of the HTC Incredible being April 19th or May 15th.

This rumor was launched because I was contacted by someone who works in the inventory control at a Verizon store.

Here’s what he had to say about the HTC Incredible:

“It is not coming out on the 29th. It will be either April 19th or May 13th. How do I know? I’m one of the guys responsible for store inventory and for putting phones out on the floor for display. Verizon hasn’t told us yet what we’re doing on those dates, but these “store refreshes” always corespond with price changes and new equipment. The May date is a larger “refresh” and my money is on that one.”

New information is being leaked from BerryScoop from an insider email within Verizon that “a certain device is coming April 12th.”

The email has a subject title as:

The Journey Begins on Monday

This email was actually sent to all Verizon employees yesterday, Friday, April 9th. 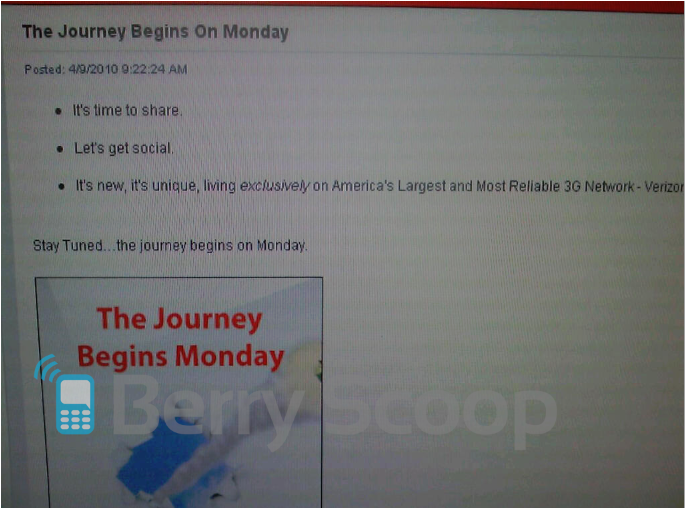 Speculation about this referencing the HTC Incredible or Nexus One coming to Verizon:

Some believe that this email could only be referencing two possibilities – the Verizon Nexus One of the HTC Incredible, both of which are highly expected to be coming to Verizon soon.

Seems a bit odd to think that the phone is going to release in 2 days with no announcement.

I bet you money it has to do with Microsoft Pink, and not the N1 or Incredible….. *slaps head*

Looks to me that nobody really knows what's going on. Monday is likely going to be an announcement of some kind.

It's a reference to microsofts pink

Isn't Skype already announced and in use?

Isn't Skype already announced and in use?

Microsoft Pink is coming out on April 12th. The HTC Incredible is coming to Verizon on April 29th and Nexus One will be coming sometime after that…

You sound so sure of yourself. How do you know, can you provide a proof, a link perhaps, or something to show us you aren't scamming like the other fools?

@coolz Rob is not a dork, although "The Journey Begins Monday" could mean several things and at this point we're all speculating. Don't down-rate his article cause you disagree.

The email says 'exclusively' on [Verizon] – Nexus One isn't exclusive. Does that tell us anything?

I was wondering if everyone missed the obvious! Good call man, I was thinking the same thing!

Who ever wrote this airticle is a real dork.

If you look closely at the image (cut off in this posting), there's a football flying through the air. Monday is the launch of the NFL for Verizon programming.

These leaks are a joke. It's become like Elvis being sighted at the mall. It's a phone. Give us a real release date Verizon, or let's end this affair already. This has become a joke of a way to market phones.

That email parallels language used in this Microsoft Pink ad:
.

As others have mentioned, the Google Nexus One will not be exclusive to Verizon.