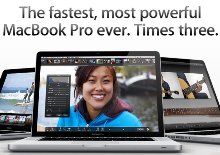 Just when you thought you could actually catch your breath for a minute and recover from all of the Apple news, Steve Jobs just keeps the Apple machine running in overdrive.

This version of the MacBook Pro is faster than ever and has powerful, high def graphics to boot!

The focus of Apple’s release of the new MacBook Pro is clearly centered around speed.

The 15-inch and 17-inch MacBook Pro netbooks come standard with Intel’s Core i5 and i7 processors (respectively).

The 15-inch and 17-inch models will also use Apple’s graphics switching technology, which allows the computer to automatically toggle between the Nvidia GeForce GT 330M and Intel’s HD Graphics processors.

Time to get a MacBook Pro

So what do you think about Apple’s new MacBook Pro netbook?

There is no doubt that the elegant, more sophisticated computers on the market are coming directly from Apple.

One of the main points of friction for most people is, however, the pricing of the MacBook pros.

Microsoft seems to have captured more of the masses in regards to their products and pricing. Compare a $600 Dell laptop with a MacBook Pro starting at 3 times that amount.

7 replies on “MacBook Pro 2010 Review: Now Faster Than Ever”

Do you know what a netbook is?