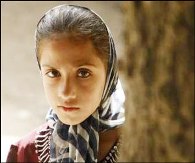 This is a reflection of the morality and mentality of the Taliban militants, and the reason why we need to support the troops who are over in Afghanistan fighting against terrorism.

An Afghanistan girl, 18 years old, was shot and killed by a sniper who was waiting for her to leave work.

The girl worked at a United States run facility, and she was simply heading home from her days work.

Here’s more from the AP:

“Afghanistan (AP) – A gunman lying in wait shot and killed an 18-year-old woman as she left her job at a U.S.-based development company Tuesday, casting a spotlight on a stepped-up campaign of Taliban intimidation against women in this southern city where U.S. troops plan a major operation in the coming weeks.

Although there was no claim of responsibility and police said the motive for the attack was unclear, Taliban militants have been particularly harsh with women who work for foreign organizations or attend school. Bands of thugs are increasingly harassing women who want jobs, education and their own style of clothing, women and aid workers say.”’

Again, the reason why we need to support our troops in Afghanistan and believe in the cause of freedom, and liberty for all people.

Good Lord, this makes me so mad I’m about ready to go back into the military myself!