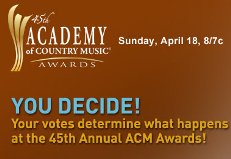 Your vote counts for the 2010 ACM (Country Music Awards)

At the CBS website, you can vote fo the Academy of Country Music Awards at www.cbs.com/vote. Your vote will be crucial in determining who wins at the 45th Annual ACM Awards. The ACM Awards will be on Sunday Apri 18, 2010 at 8 p.m. Eastern.

Your votes will determine who will win the Top New Artist.

Your votes will also determine who the Entertainer of the Year will be. You will also be able to determine  the Brooks & Dunn Performnace. You choose the song.