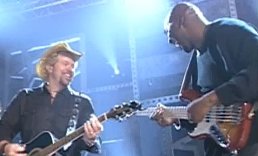 In spite of his reputation, Keith has still tried to show his softer side during his career through ballads such as ‘You Shouldn’t Kiss Me Like This’, ‘My List’ and ‘Crash Here Tonight’.

However, regardless of the success his more sentimental songs generated, Toby Keith has continued to be predominantly known for his ability to deliver a rowdy number. But with his new single, ‘Cryin’ For Me (Wayman’s Song)’, that might all be about to change.

In recent years singer Toby Keith has been dubbed one of the most outspoken rebels in country music who is at times more likely to be making headlines for his feuds with Dixie Chicks’ lead singer, Natalie Maines, or boycotting the Country Music Association Awards. And it is that hardcore tenacity that led him to produce the powerful hits like ‘How Do You Like Me Now?’, ‘Courtesy of the Red, White& Blue’ and ‘Beer For My Horses’.