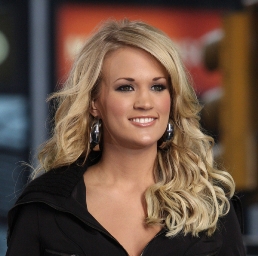 LAS VEGAS — Carrie Underwood made history at the Academy of Country Music Awards on Sunday night, becoming the first woman to win entertainer of the year twice.

“I think I just got makeup all over Brad Paisley,” an excited Underwood said as she went onstage to accept her trophy. “Thank you, God, praise the Lord.”

Underwood also was recognized earlier in the evening with special trophy for “triple crown” of ACM wins — entertainer of the year, top female vocalist and top newcomer — in the course of her career.

Read the full story at Chron.com