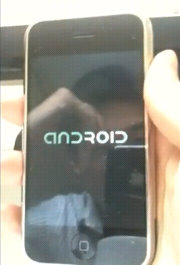 So much for Apple’s (Steve Jobs) goal of keeping the iPhone closed off to the world of open source, Flash, and other Android favorable attributes. The iPhone has gone far beyond just being jailbroken – someone has now figured out how to install, and successfully run, Android on the iPhone.

This is truly one of the craziest things I’ve seen in a long time. I mean, who would’ve thought that Android would have be running on an iPhone? Who ever thought that the iPhone would ever been running anything other than the iPhone OS?

According to ZDNet.com, iPhone Hacker and Dev Team member planetbeing has successfully installed Google’s Android operating system on the iPhone. He even set it up to dual boot Android and the iPhone OS.

The craziest part about the iPhone being hacked to run Android is that flash can run on the iPhone.

So in do time, when Adobe releases Flash 10.1 then the iPhone will ultimately be able to run flash.

Hmmm… I wonder if Adobe isn’t behind this whole iPhone hacked to run Android gig.

My only question here is this – if Android can run on the iPhone, then will the iPhone OS be able to run on Android powered phones?

Or better yet, would any Android OS owner even want to put the iPhone OS on their phone?

Probably not since the iPhone cannot run flash.

Yep. We need flash. Can't live witho… wait… Has adobe ever shipped a full version of flash for a mobile device? So we've been without it for a while….? The power of HTML5 I gotta say it looks and works better on both the desktop and the mobile device. That's just a consumer's view though. They don't make up a big portion of the market though, so er, good thing we've got you soldiers of fortune fighting to get something resource intensive placed on our mobile devices. Battery life? Pah. Rubbish.