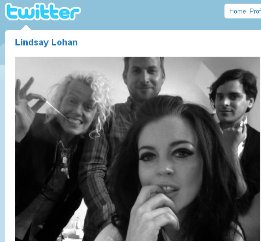 Lindsay Lohan took some time yesterday to speak her mind – and I mean really speak her mind – about some things she has going on in her life at the moment. One of those “things” that are going on is her obvious discontent for her father and his, as Lindsay Lohan puts it, ” a pathological liar- a person who lies to the point of it being considered a disease or condition, an abnormally habitual liar = MY FATHER”.

Lindsay Lohan’s Twitter profile was the platform of choice for about 8 different tweets that were all lightning bolts and bullets directed at her father. Apparently, as you can tell from the tweets, her father has been going off on Lindsay and her sister Ali. The reason for the discontent isn’t something I know, but it’s obvious that Lindsay isn’t at all pleased about her father.

Lindsay Lohan does seem to give a lot of praise to her mother. In one tweet, Lindsay says that “my mother is AMAZING! not ANYTHING like what Michael is saying. W/out her, i”.

Anyway, in the Twitter rant, Lindsay Lohan seems to also be defending her sister Ali who she says she is homeschooling. That certainly can’t be an easy thing to be to doing – homeschooling while you are having to deal with all the other drama.

So here’s a screenshot of Lindsay Lohan’s Twitter rampage: 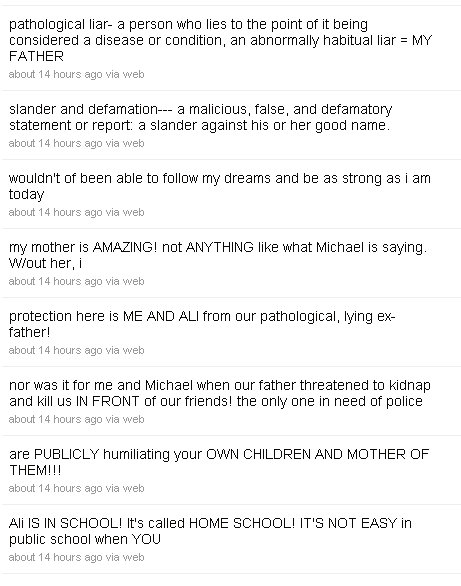 2 replies on “Lindsay Lohan Goes Off on Twitter, Homeschooling Ali”

Lindsay Lohan is really close near death and become forgotten forever. I can understand her father. He is really doing everything to save her. It is just sad to see such a star go down.