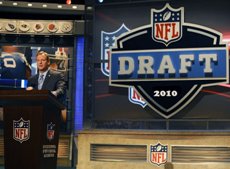 The 2010 NFL Draft went as most people had planned. There really seems to be a science associated with figuring out the NFL draft picks. And the predictions weren’t too far off from what actually went down in the Green Room in New York City.

Perhaps the draft pick that garnered the most attention was the 25th pick of the night, which was Florida’s prized quarterback Tim Tebow.

After Tim Tebow was selected by the Denver Broncos, ESPN was able to get in the door for an exclusive interview with the quarterback.

As for the rest of the NFL draft, people might be wondering what exactly took place in the very first picks of the night. Some people believed that Sam Bradford was a sure bet to be the #1 draft pick for the 201 NFL Draft, and guess what, they were right. So hopefully some people made out like a bandit over that gamble.

First of all, you are a horrible writer. You should give up and pursue something else. I believe that you meant to say Tim Tebow was at his *residence*. Residents is an entirely different word with an entirely different definition. Seriously, that is a grade school level mistake. Kill yourself so that your half retarded genes cannot be passed on.