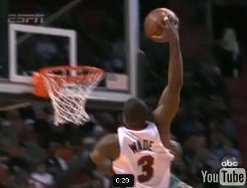 Well Miami fans, you might want to start reconsidering sending Dwyane Wade on his way to another NBA franchise.

Dwyane Wade still has some serious heat, and dunking the ball over Kevin Garnett shows just what Dwyane Wade can still do on the basketball court.