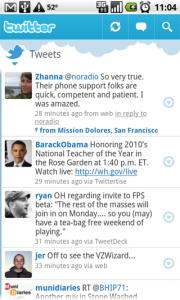 The Twitter app seems to be very integrated into the Google Android operating system.

With the Twitter app you able to access your Twitter accounts timeline from a home screen widget.  Also you will be able to send tweets from your location in Google Maps.

The Twitter application also allows you to read & send tweet from your Google Talk & your phones contact list. The application has been integrated into the share function in the camera & gallery of Android, allowing you to send your photos to twitter. This seems like a great application to have, but the only draw back is the Twitter app only runs on Android 2.1 or above. Which I think was a poor move since most of the Android handsets run Android 1.5 or 1.6.