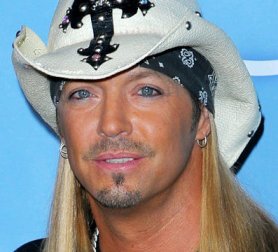 Bret Michaels suffer a massive brain hemorrhage last month and was rushed to an undisclosed hospital where the world waited for trickling news updates as to the Poison lead singer’s status. Many people believes that Bret Michaels had actually died during the whole episode, but then reports started coming in that he was under 24 hour watch in Intensive Care.

Today however, Bret Michaels doctor reported that Bret is walking and talking and is expected to make a full, 100% recovery.

Bret Michaels was admitted to the exclusive Barrow Neurological Institute on the morning of April 22nd. The world, from that point forward, could only wait for word as to his status.

But according to Bret Michaels doctor:

“I really expect that he will fortunately make a 100% recovery,” Dr. Joseph Zabramski, Barrow’s chief of cerebrovascular surgery, told reporters. “He’s just one of those lucky people, the 20% or so who have a subarachnoid hemorrhage who make a complete recovery and are able to resume all of their normal activities.”

The doctor said multiple angiograms failed to turn up evidence of an aneurysm. His medical team still doesn’t know what caused Michael’s bleeding, he said.

“Patients who don’t have anything identified in their angiograms tend to do well,” Dr. Zabramski said. “This is one of those rare instances in medicine where we’re actually pleased not to be able to find what caused the problem.”