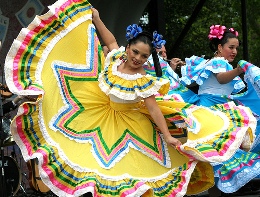 Cinco de Mayo is almost upon us (it’s the 5th of May) so we thought we would give you a little refresher on the history behind the holiday. The holiday is Mexican and it celebrates the victory of 4,000 Mexican soldiers against 8,000 French forces on the morning of May5, 1862. A common misconception is that Cinco de Mayo celebrates Mexico’s Independence Day. That day is in fact September 16th.

Cinco de Mayo is not celebrated everywhere in Mexico (it’s a regional holiday) but it is observed in America and in many countries around the world as a celebration of Mexican heritage and pride.

The battle of Cinco de Mayo took place at the town of Puebla, 100 miles east of Mexico City. According to Viva Cinco de Mayo, the French army attacked Mexico City, assuming that the Mexican army would surrender if their capital city was taken:

Under the command of Texas-born General Zaragosa, (and the cavalry under the command of Colonel Porfirio Diaz, later to be Mexico’s president and dictator), the Mexicans awaited. Brightly dressed French Dragoons led the enemy columns. The Mexican Army was less stylish.

General Zaragosa ordered Colonel Diaz to take his cavalry, the best in the world, out to the French flanks. In response, the French did a most stupid thing; they sent their cavalry off to chase Diaz and his men, who proceeded to butcher them. The remaining French infantrymen charged the Mexican defenders through sloppy mud from a thunderstorm and through hundreds of head of stampeding cattle stirred up by Indians armed only with machetes.

i aint im talkin bout gettin out this hot a*s

i tell you about these ingnorant dum hoes