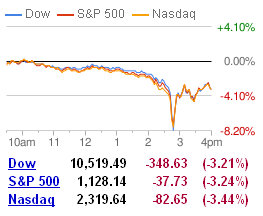 The Dow Jones Industrial Average (INDEXDJX:.DJI) took a serious hit today plunging 1000 points before bouncing back. I just wrote about how Apple stock plunged today right along with the rest of the NASDAQ.

The Dow Jones Industrial Average (DJIA) plunged more than 9%, and the S&P 500 Index (SPX) and the Nasdaq Composite (COMP) both were down more than 6% in intraday trading, according to SchaeffersResearch.com.

According to the NYTimes.com,The market decline on Thursday turned into a freefall, with major indexes tumbling as much as 8 percent in afternoon trading. The euro declined more than 2 percent. In afternoon trading, the Dow Jones industrial average was down 8.8 percent, or 996 points, at one point. The Standard & Poor’s 500-stock index was down 90 points or 7.73 percent, and the Nasdaq was down 175 points, or 7.2 percent.