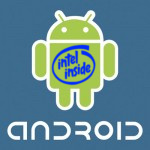 Back in April Intel had told PCWorld it started porting the Google Android mobile operating system to the companies Atom based processors. In a press release the company went into more detail about which processor will support the Android operating system. According to the press release the Intel Atom Z6xx Series processor will be able to reach speed of up to 1.5 Ghz for high-end smart phones & up to 1.9 Ghz for tablets. The chip set will also support for Wi-Fi,WiMax & 3G/HSPA. The Atom Z6xx processors will allow for 1080p video decoding, 720p video recording. The new chips will also improve battery life allowing for 10 days of standby. The new chip set will also allow for up to 2 days of audio playback & up to 4-5 hours of browsing & video.