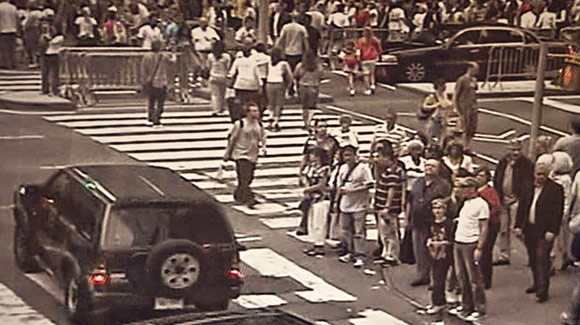 Part of Times Square had to be evacuated after a suspicious package was found in the vacinity.

Part of Times Square was evacuated between West 44th and West 47th Streets after the police received reports of a suspicious package at Broadway and West 46th Street at about 12:45 p.m. It was the second suspicious-package call and at least partial evacuation in the area of the day, according to the New York Times.

The package “looks like a cooler,” a police spokesman said. “We’re trying to see if it’s clear.”

It was the second suspicious-package call and at least partial evacuation in the area today.

Several streets have been closed as a precaution because the cooler was found a few blocks from where a smoking SUV and failed car bomb was found Saturday night.

There are several blocks closed as a precaution due to the worry over a possible bombing. NYPD are being especially careful because of the failed car bomb attempt in Times Square on Saturday, May 1, 2010.

Are The Terrorists Winning Even If People Aren’t Dying?

People in New York City are seriously on edge, and rightly so.

But we have to ask ourselves, are the terrorist winning their little war even though car bombs aren’t exploding in Times Square?

I mean, if the terrorists have planted such a f ear into our hearts and minds, and Times Square is continually evacuated several times a day, and we live in perpetual paranoia over bombs, car bombs, and terrorist attacks, what kind of life is that?