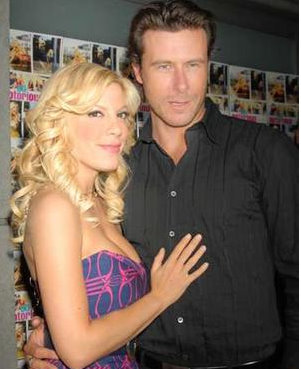 I’m not one who subscribes to celebrity gossip, but every now and then I find a story that reinstates a sense of  “there’s hope for Hollywood” after all.  I found this story to be quite refreshing.

Tori Spelling and Dean McDermott, in an effort to halt rumors that there is trouble in their marriage,  plan to renew their vows over the weekend.

The couple, seen on their show “Tori & Dean: Home Sweet Hollywood” – have downplayed any talk of a split. Appearing on the “The Ellen DeGeneres Show” Spelling said, “There is no divorce in our future, at all.”

McDermott and Spelling met while in Canada filming the TV movie “Mind Over Murder.” They have two children –  Liam, 3, and Stella, who turns 2 this summer.  One could only hope that they are not just doing it, “for the children” or “for the show”… but because they truly love each other.

The date the couple has chosen marks three years since they tied the knot on a private island in Fiji.  That event was attended only by the barefoot bride and groom.   Spelling says that they have invited close friends and family to an intimate gathering in the Los Angeles-area on Saturday.

Tori will release her third book in June.  The title is rumored to be, “Uncharted terriTORI.”