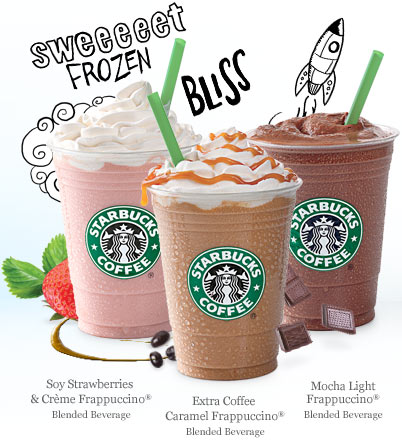 Starbucks is a master of consumer marketing and the king of turning problems into promotional opportunities.  Excelling at everything from social media to their in store displays, they have done it again with a new promotion.  The Starbucks Happy Hour Promotion kicked off this afternoon with half price Frappucinos made to order.  Starbucks plans for the promotion to be held from the hours of 3-5 PM until the 16th of May.

During the promotion you can get half price Frappucinos made any way you would like.  The whole effort is meant to boost sales during their slow hours, the afternoon.  So far, it is working and it has only been a day.

Starbucks as a smart brand and marketing company has held a number of successful promotions with efforts to boost sales by promoting x or y.  For instance, free refills or everyone’s favorite”free pastry day” work wonders at getting people into the store and in many cases, buying more than a free pastry, Frappucino, or a refill. The company company spreads the word on mobile and social media channels allowing their best marketers (coffee lovers and fans) to do the work for them. People can sign up for Starbucks messaging alerts on their website and get immediate notification on promotional deals going on at Starbucks on their mobile device.  After Starbucks puts the message out, people are there within minutes to be the first to enjoy the deal.  Sending out a promotion like this one and expecting people to show up only works if the channels are set up, and in Starbucks case, they have an intricate universe of talkers and social media users spreading the word via Twitter, Facebook, text, and more.