Well according to a tweet from HTC saying the HTC DROID Eris is getting Android 2.1 today. The Android 2.1 update will have some of the same features that are found on the Nexus One which are pinch-to-zoom in the Gallery & Google Maps, support for voice-to-text, a new gallery application with 3D layout & Google Maps with Navigation that just some of the features. HTC also tweeted that it may take a matter of days for the update to get to everyone’s handset. The tweet also included a link showing what the update will look like when it arrives on the Droid Eris. 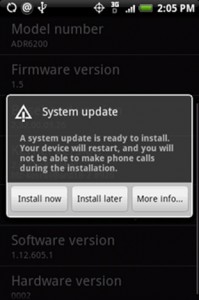 3 replies on “HTC DROID Eris is getting Android 2.1 today”

Well I didn’t even see a single photo of droid eris here (I’m curios since my handset is Hero).
Instead, I see a lot photos of iphone.. how messy is that??