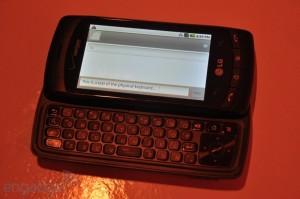 Well the guys over at the phonescoop website have had a chance to go hands on with the LG Ally during a press event.  The LG Ally will have a 3.2 megapixel camera,600MHz processor,GPS,Wi-Fi,Bluetooth & pre-installed 4GB microSD card.The LG Ally will feature Android 2.1 and the 3D app drawer that’s found on the Nexus One. The device will have all the Google mobile applications.  The video below shows off some of the features of the handset. The LG Ally will be available on May 20th for Verizon,at this time a price has not been announced.