Eyjafjallajokul, the volcano in Iceland with the unpronounceable name, is once again demonstrating to the world the impact that volcanism can have on the world’s weather. Flights in Spain, West Asia, and North Africa were cancelled when the volcano began again spewing ash into the atmosphere, as seen in the image below: 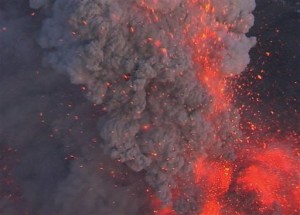 And in this video link:

When volcanoes erupt, they funnel ash, debris and gases into the atmosphere. One of these gases, sulfur dioxide, can react in the atmosphere to form sulfate aerosols, which are tiny particles suspended in the air. These aerosols can scatter the incoming rays of sunlight, not only producing colorful sunsets, but also changing the amount of solar radiation that reaches the Earth’s surface, and therefore potentially altering global temperatures.

The eruption of the Philippines’ Mount Pinatubo in 1991, for example, caused global temperatures to be cooler than normal in the following year. I fondly remember my dogs playing in the 14 inches of snow we received in South Carolina as a result.  The even larger eruption of the Tambora volcano in Indonesia in April 1815 caused what was called “the year without a summer,” with snow falling across the United States in July in 1816.  Already, from this currently continuing eruption,  we have seen comparatively cool temperatures for this time of year in the Northern Hemisphere. 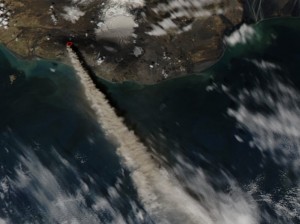 This photo shows ash from the  Eyjafjallajokul as the wind carries is away from Iceland towards Europe and Africa. This thick, obscuring cloud has affected air travel in over a dozen countries.

Funny how something practically synonymous with the word “heat” can be the cause of cooling on a global scale.