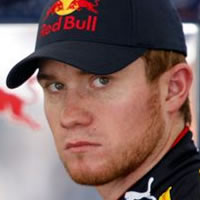 Brian Lee Vickers was born on October 24, 1983 in Thomasville, North Carolina). Brian Vickers  is an American NASCAR Sprint Cup Series driver. Vickers was the 2003 Nationwide Series champion, and at age 20, the youngest champion in any of NASCAR’s three top-tier series. He currently drives the #83 Red Bull Toyota Camry for the Red Bull Racing Team.

Vickers, who is in his fourth season with Red Bull Racing, made the Chase For The Sprint Cup last year but is 20th in points this year. He is 160 points out of the Chase after last week’s 10th-place finish at Darlington Raceway.

Vickers began running go-karts in 1994. Over the next three years, he won eighty races in the World Karting Association, and won three championships, including the 1995 championship against three-time winner Mike Schwartz (WKA). In 1998, he moved to the Allison Legacy Series, and won five races during the course of the season. After competing in the NASCAR Dodge Weekly Racing Series in 1999, he moved to USAR ProCup, winning Rookie of the Year and two races in 2000. The next season, he won five more races and finished second in points.