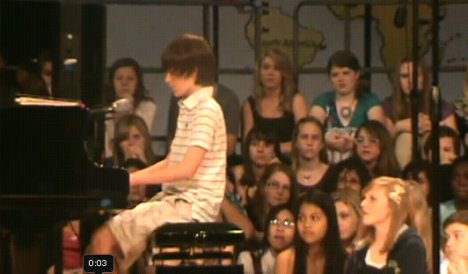 There are no less than 50 copies of this kid’s video on YouTube and every one of them seem to have hundreds of thousands of views.  So it should be very simple to assume that this kid’s video views are well exceeding a million views within just a day or so. That might be exaggerating, but then again, maybe not.

This kid, Greyson Michael Change is a 6th grader who got on stage at some event, played the piano and sang ‘Lady Gaga’s Paparazzi’ song. You can see the girls in the background slowly get more and more excited about what this kid was doing the more he kept playing.

Anyway, he is now easily a YouTube sensation and you better believe that we are going hear the name Greyson Michael Chance a whole lot more in the very near future.

Forget American Idol – besides he is probably too young anyway – because this kid just needed one video, a website called YouTube and that’s it – he is instantly launched into stardom.

Michael Chance’s teacher, Kelly Cheek claims, “He’s the talk of Cheyenne Middle School. It’s been insane. Our phones have been ringing off the hook. The kids are so excited, we can hardly get them to do anything but talk about Greyson.”