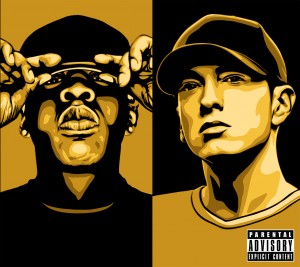 Hov (Jay-Z) & Slim Shady (Eminem) have just announced that they will be performing two shows together in their home states. Eminem will start first headlining a concert September 2nd at Comerica Park in Detroit. Then on September 13th Jay-Z will perform at his favorite baseball team (yankees) stadium.

“These shows are like a dream come true. I’ve always hoped that hip hop could play any stadium like other genres of music.” says Jay-Z. “This is a once in a lifetime set of shows and were both really going to bring it to our hometowns.” Eminem says. Ticket information to this event is currently unavailable but I’ll keep you posted. So what do you think does this sound like a crazy show? Do you want to go? Leave Your comments below!