“All of the crew are reported unharmed and are well despite their ordeal. All of the crew’s families are being notified,” the ship’s owners, Zodiac Maritime Agencies, said in a statement. 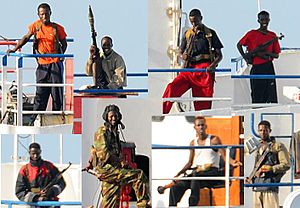 The owners of the British chemical tanker, the St James Park, held by Somali pirates –  since December 28 –  paid a ransom to secure the release of the ship and its 26 crew, it was announced Friday.  The  statement said the crew included six Indians, five Bulgarians, three Turkish, three Filipinos, three Russians, two Romanians, two Ukrainians, one Georgian and one Pole.

The 14,000 ton freighter was  headed from Spain for Thailand when it was hijacked.  Zodiac Maritime  has another ship flying the British flag held hostage in the region, the Asian Glory, which was seized on January 1 with its crew of 25.  “The Asian Glory is anchored off the Somali coast. The negotiations with the pirates are ongoing and the company is committed to resolving the hijacking at the earliest opportunity. Our thoughts are with the crew,” the company said.

And the piracy will just continue.  Maybe the answer is to either escort the ships, or arm the ships.  Too bad Russia did not set a precedence for handling the pirates.