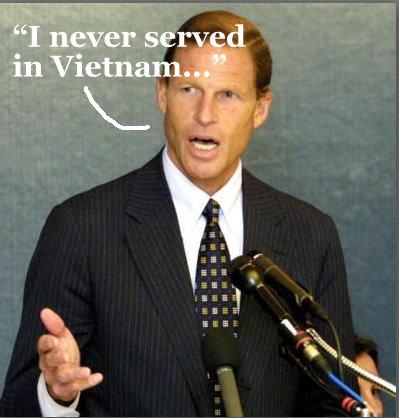 It’s a sad day indeed when we have a US Attorney General, and soon to be Senate candidate, lying about his “serving in Vietnam”. Attorney General Richard Blumenthal has repeatedly made comments that were clearly in the context that he served in combat in Vietnam.

But what you are about to read – especially if you are a Vietnam Veteran – is more than likely going to upset you, perhaps even enrage you over what Richard Blumenthal has been saying.

The NY Times is reporting that Richard Blumenthal DID NOT actually serve in Vietnam, despite the repeated comments to Veterans that he did.

Here’s and excerpt from a speak Richard Blumenthal gave in Norwalk in March 2008:

“We have learned something important since the days that I served in Vietnam,” Mr. Blumenthal said to the group gathered in Norwalk in March 2008. “And you exemplify it. Whatever we think about the war, whatever we call it — Afghanistan or Iraq — we owe our military men and women unconditional support

Since that days that you served in Vietnam huh?

Let’s review some facts that the NY Times pointed out:

First of all, Richard Blumenthal never served in Vietnam. He obtained at least five military deferments from 1965 to 1970 and took repeated steps that enabled him to avoid going to war, according to records.

The deferments allowed Mr. Blumenthal to complete his studies at Harvard; pursue a graduate fellowship in England; serve as a special assistant to The Washington Post’s publisher, Katharine Graham; and ultimately take a job in the Nixon White House.

In 1970, with his last deferment in jeopardy, he landed a coveted spot in the Marine Reserve, which virtually guaranteed that he would not be sent to Vietnam. He joined a unit in Washington that conducted drills and other exercises and focused on local projects, like fixing a campground and organizing a Toys for Tots drive.

These are all steps taken by Richard Blumenthal to clearly avoid going to Vietnam and having to serve in a combat zone.  Life is funny like this – Mr. Blumenthal never would have guessed that after all these years, those lies would catch up to him and more than likely cost him a future Senate seat, and perhaps cost the Democratic party a significant amount more.

And now with Richard Blumenthal running for Senate, the positions of defense are beginning to rise up.  Mr. Blumenthal’s campaign manager, Mindy Myers, said Monday that any suggestion that he was ducking the war was unfounded, saying he was engaged in important work.

Mindy Myers is quoted by The NY Times as saying,

“It’s flat wrong to imply that Richard Blumenthal’s decisions to take a Fiske Fellowship, teach inner-city schoolchildren and work in the White House for Daniel Patrick Moynihan were decisions to avoid service when in fact, while still eligible for a deferment, he chose to enlist in the Marine Corps Reserves and completed six months of service at Parris Island, S.C., and then six years of service in the Reserves.”

Do you think that Richard Blumenthal has been flat out lying about his service in Vietnam purposely, in order to have a more reputable image in the eyes of the public?

Based on the accusations that Mr. Blumenthal has been lying about his Vietnam service, what do you think should be done about it?