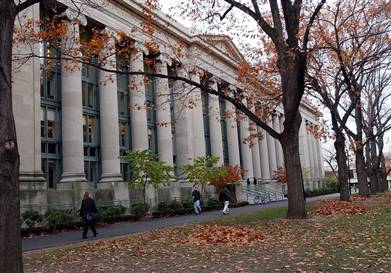 Adam Wheeler, a 23 year old from Milton, Delaware, has some how successfully duped Harvard out of $45,000 in financial aid, scholarship money, and academic awards.

I’m going to make this prediction right now – the financial aid director at Harvard has already been fired and kicked off Harvard campus, never to return… or else!

According to sources, Massachusetts prosecutors say 23-year-old Adam Wheeler claimed he had earned a perfect academic record at Phillips Academy in Andover and at MIT before enrolling at Harvard, when in reality he had never attended either school.

Wheeler allegedly forged his way into Harvard University by submitting false transcripts saying he had attended the Massachusetts Institute of Technology and the elite Phillips Academy in Andover. He also said he scored a perfect score of 1600 on his SAT. After transferring to Harvard, he earned some $45,000 in scholarship, grants, and financial aid.

Investigators later allegedly found that Wheeler’s initial Harvard application was bogus. They discovered that he had forged a transcript from MIT with letter grades, though MIT uses a numerical system for scoring, and that he had claimed to take classes at Phillips that the academy did not offer.

Wheeler was caught only because of his activities in applying for post-graduate education. If he had just taken his Harvard degree and stopped, he might have gotten away with his fraud!

Wheeler’s transgressions came to light when a Harvard professor [ James Simpson ] noticed similarities between Wheeler’s work and that of another professor during the application review process for the Rhodes Scholarship. The professor then compared the two pieces and voiced concerns that Wheeler plagiarized nearly the entire piece.

Wheeler’s file was referred to University officials, who decided—upon discovering the falsified transcript—to open a full review of Wheeler’s academic file. Wheeler was invited to present his case at a disciplinary hearing convened by University officials, but decided to await the decision at his home in Delaware rather than attend the meeting, according to the press release.

How did Harvard Get Duped?

So the obvious question here is how in the world did Harvard – known for academic superiority – get tricked out of $45,000?

I say this jokingly, but maybe since Harvard was duped in such a big way, and since this has likely never happened before in the history of the school, maybe this kid deserves a full scholarship to Harvard for such a great feat! And I when I great, I mean in magnitude only – not in accomplishment.

Adam Wheeler is scheduled to be arraigned today in Middlesex Superior Court on a variety of charges including larceny, identity fraud and pretending to hold a degree.

So what are the penalties associated with these crimes against Harvard?

How much time can this guy expect to serve for his fraud?