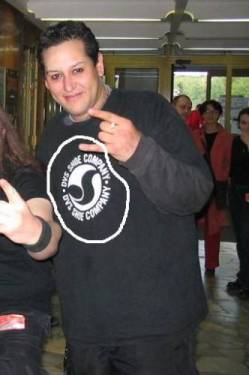 Slipknot bassist Paul Gray was found dead in his hotel room in Des Moines, Iowa on Monday morning. Paul Gray was discovered by the hotel staff personnel from the TownePlace Suites, according to the Urbandale Police Department.

An autopsy, including toxicology tests, will be performed Tuesday, Disney said.

Gray was arrested in Iowa in 2003 on drug possession charges when police found small amounts of marijuana, two syringes and a substance that field-tested positive for cocaine after he was involved in a wreck with another motorist.

Slipknot won a Grammy in 2006 for best metal performance for “Before I Forget”.

According to some preliminary reports that are coming out, there was no foul play in the death and discovery of Paul Gray’s body.

So are you a Slipknot fan?

Are you one of the Slipknot “Maggots”, as fans of Slipknot are famously called?

were going 2 miss you Paul!
slipknot wont ever be the same without you <3