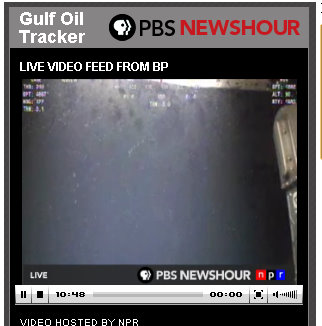 The PBS.org live video feed of the BP oil spill in the Gulf of Mexico is now showing a much calmer scene than yesterday and the days previous. As BP finally go the top kill procedure underway, they are attempting to choke out the oil spewing from the broken oil pipeline.

And from the looks of the live BP oil spill video below, BP has been successful.

If the BP oil spill video below is actually showing the same location of the spewing oil from previous days, then I would say that yes, BP has been successful at choking out the BP pipeline from spewing oil.

here’s a new video of the BP oil spill:

.
wrong go here the spill is still going on

.
wrong go here the spill is still going on