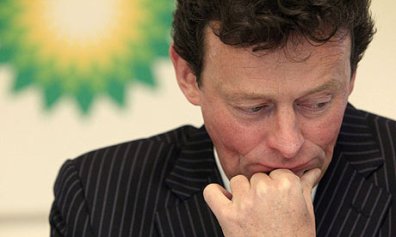 The United States government has found itself in a most peculiar situation in the whole gulf oil spill mess caused by one of BP’s oil lines that broke 5000 feet in the ocean.

News is out today that the federal government is working with state officials in Louisiana to explore possible criminal and civil legal action against BP. With 11 people dead from the initial BP oil rig explosion, and now the worst natural disaster occurring in the Gulf of Mexico, someone (or several people) has to ultimately be to blame for the disaster.

Ultimately, I don’t believe it would be in BP’s best interest to take their focus off the task of stopping the oil leak regardless of the legal action being pursued from the state and federal government. The oil has to stop leaking, period – and only BP, at the moment anyway – are the only ones who can stop it.

sue them for the sinkhole in Guatemala as well.

My idea is not cheap and not short term, however, they need to find a way to build a giant cement sectioned tunnel. This tunnel needs to run from the sea floor to the ocean surface. This would at least isolate the intruding oil and they could then extract the oil from the tunnel. Then they need to clean the ocean, and rectify the massive oil spill. There are ways to stop it, and this tunnel needs to be massive in diameter.

Brilliant. You should work for BP.

i think they need to look saat the simplest of ideas first because most of the time the simple things work.

Living in the Florida panhandle, this event is very real to my community. However, I don't feel that criminal charges should ever be filed simply to appease voters in an attempt to maintain political power or office. That is exactly what this criminal investigation is about. The government can pursue any civil action it feels necessary but a line is being crossed when criminal proceedings begin. The federal government was and is in charge of inspection and oversight of these rigs so they are just as responsible as BP for neglected procedures and overlooked equipment problems.

Well I think that Bp should have had some sort of backup plan in case something like this was to ever happen. Now the worst has happened and they are running around like chickens with their heads cut off. I also think that they should not have idiots working on oil lines such as these. Not to mention all the poor inocent sealife that is being killed, dying slow painfull deaths. This spill is not only hurting the sea but hurting the pockets of fish-markets, resturaunts, and pretty soon all of us.

see there, monty has a good point with ecologicle problems and all that sauce, i will now quote a great presedent of the United States of America

"you see the eye of the tiger in the wind of dispare, but do not lose your pancakes for there is hope for this world and the next. we must embrase are fear of elmo and live lives of magic and wonderfulishnes. luke i am your father and the world will go on to be attacked by space coconuts" -George Washington

Im writing an opinioned essay on this oil spill where should I even beging this eesay on how bp f**ked up ???