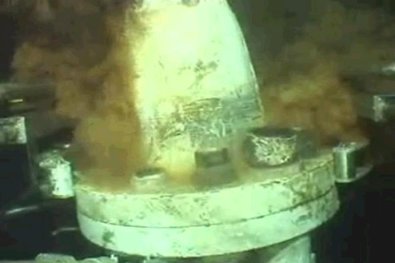 A couple of new updates have emerged today in the ongoing crisis with the BP oil pipe that is gushing water into the Gulf of Mexico. The process that is underway by BP to control the oil spill, and the gushing oil from their broken well, is now the 3rd attempt by BP to control and contain the oil spewing.

Here are the new emerging updates of the BP gulf oil spill:

1) Earlier today, BP announced they had successfully completed the cut of the leaking oil pipe. This is the cut that yesterday snagged to the saw and nearly caused the failure of BP’s 3rd effort at containing the oil gush.

From the NYTimes earlier today, “Now that the damaged riser pipe is severed close to the stricken BP well in the Gulf of Mexico, engineers can try placing a cap to catch the leaking oil, Adm. Thad Allen told reporters during a briefing in Metairie, La., on Thursday.”

2) According to sources, BP has just completed the placement of the oil seal / oil cap over the newly cut pipe that has been gushing oil. Other reports are stating that the full placement and effectiveness of the new seal can take days to full get in place.

Because of the saw getting stuck in the pipe during the cut, the pipe is jagged causing the seal to not sit and completely seal properly.

However, this full assessment of the new seal placement will not be known for several days.