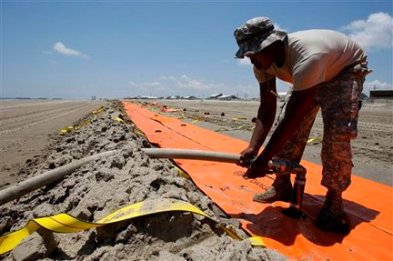 BP has agreed to fund an estimated $360 million project to construct up to six barrier islands along the Louisiana coast, supporting the government’s decision that the cost for construction should be paid directly by BP.

BP is making progress on their 3rd attempt to stop the oil spill from gushing into the Gulf of Mexico. Yesterday, as BP prepared to place a seal over the oil spill and redirect the gushing oil onto barges, the diamond tip saw used to cut the pipe got stuck in the pipe itself. As the pipe needed to be cut for proper sealing, the saw getting stuck became a major obstacle.

However, it was announced late last night that the saw has been unstuck and BP progresses with the sealing of the oil leak. No final word on the success of this 3rd attempt will be available until later this week.

Mounting Pressure from the Public

In response to mounting public pressure, the federal government decided that BP should carry the cost of constructing barrier islands along the coast of Louisiana in an effort to preserve to the Louisiana marsh lands and coast line.

BP has agreed to this decision and will pay an estimated $360 million for the projects. According to a press release, BP will not manage or contract directly for the construction of the island sections, nor will the company assume any liability for unintended consequences of the project. The company plans to make payments in stages based on the project’s milestones.

“BP is committed to implementing the most effective measures to protect the coastline of Louisiana and reduce the impact of the oil and gas spill in the Gulf of Mexico. The federal government and the state of Louisiana have agreed that the barrier islands construction is an effective response to the spill, and we look forward to working with them on this project,” said Tony Hayward, BP’s chief executive officer.

The spreading oil in Gulf of Mexico is said to now be making its way toward the Florida coast. Some estimates placed oil sheens hitting beaches in the pan handle of Florida as early as last night. Alabama, Mississippi, and Louisiana are already facing natural disasters from the oil slicks.