NASDAQ:AAPL – Apple Stock Down Over 2% For June 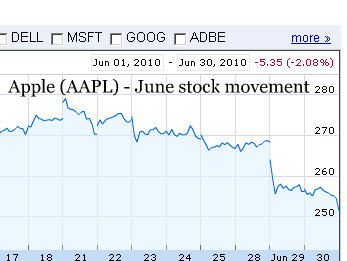 June has been quite a month for Apple shares (NASDAQ:AAPL). From the iPhone 4 pre order frenzy to the official release date of the iPhone 4, and now rumors about the Verizon iPhone coming in January 2011, June has turned out to be a headline month indeed for Apple.

However, despite the major headlines and record breaking iPhone 4 pre orders and sales, Apple’s stock price is down over 2% for the month June.

The stock market has responded favorably to the iPhone 4 release and other moves made by Apple. And now with the news that the iPhone will be coming to Verizon, Apple could quite possible double their iPhone sales.

It is interesting that even though Apple has had a banner month as far as products are concerned, their stock price is still down over 2% for the month of June.

Is it possible that anything iPhone related will impress Wall Street until the iPhone is available on other carriers besides AT&T? Or has Apple stock prices already accounted for the iPhone 4 future sales and the Verizon deal?