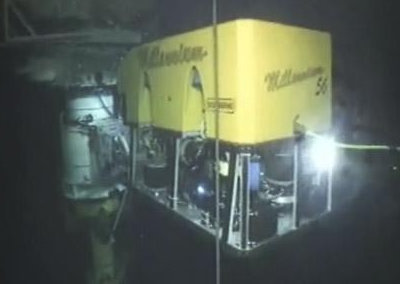 BP officials have just announced that they have successfully stopped oil from gushing out of it’s blown out oil pipe that is 5000 feet down in the Gulf of Mexico. The spewing oil has finally been stopped after the well explosion on April 20th.

From the Washington Post – Kent Wells, BP’s senior vice president of exploration and production, told reporters that a new capping mechanism shut off the flow of crude from the Macondo well at 3:25 p.m. EDT. He made the announcement after engineers gradually shut off valves to test the pressure. The engineers are monitoring the pressure to see whether the new cap and the well bore hold.

If successful, this will mark the end of the BP oil spill disaster that has been gushing nearly 2 million gallons of oil into the Gulf of Mexico each day since April 20th.

Here’s a current live video feed of the BP oil spill – notice that no oil is seen gushing from the pipe:

.
.
.
.
.
the BP test has clearly shown, that, the BOP and everything under the BOP, have had NO oil leaking (since, both, was made, by design, to resist to very high oil pressures) while the wellhead top has been completely closed by the new containment cap (whose MAIN PURPOSE isn't to close the wellhead, but, later, to collect and pump up the oil and SELL it…) and, that, was PERFECTLY KNOW by BP also BEFORE this test
.
THAT is what I've ALWAYS SAID in last TWO MONTHS in my article about the oil spill:
. .
.
so, WHY hasn't BP used a modified version of its giant Genesis GXP 2500 idraulic shears (or the containment cap used now) to do the SAME THING but TWO MONTHS AGO and BEFORE the terrific disaster in the Gulf ?????????????????
.
could FBI and the Press INVESTIGATE on that, instead of CLOSE their eyes ????????????
.
.
.
.
.