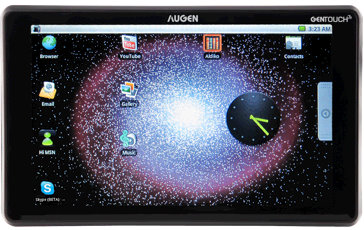 Ok, so maybe not an iPad killer.

But I have to admit that this type of tablet is going to certain cut into the iPad market share!

The Augen GenTouch 78 7″ tablet is now available for $149.99 with the following features:

That’s right, you’ll get a free leather carrying case for your tablet as well. All for the price of $149.99.

And I suppose you could also pick up a 3G data package from Verizon as well for another $30 a month.

All in all, the Augen Android tablet at K-Mart is something that will certain fly off the shelves.

You can save about $350 by buying the Augen from K-Mart instead of the iPad.