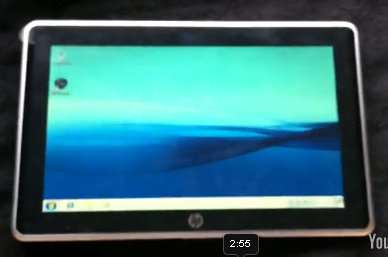 Let me just tell you before you even watch this video, you are going to be sorely disappointed in the performance of this HP Slate tablet pc. For one thing, why in the world is a desktop version of Windows 7 running on a tablet device to begin with? Apple has redefined touch pad technology with iOS and it is (or should be) industry standard for all tablet devices. Not only that, watch how long it takes for the Windows 7 OS to load. This is a-typical Windows drama that has now come to a tablet device. Let me assure you Microsoft, running your heavy, inefficient Windows 7 OS on a tablet will be a huge mistake – I can already hear the war cries coming from the blogosphere for the destruction of Microsoft.