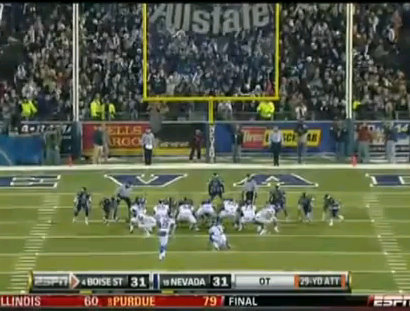 You can see the YouTube video of Boise State’s Kyle Brotzman missing both of his field goals against Nevada below – this was a huge upset for Boise State.

Boise State’s kicker Kyle Brotzman missed two critical field goals that could have easily been the winning factor for Boise.

Brotzman has been an outstanding, solid kicker all year.

The first kick Brotzman had to make last night for the win was a 29 yard field goal – seemingly nothing to the solid kicker.  But he stepped up, kicked the ball, and missed.

This forced the game into overtime.

And then again in overtime, Brotzman could have secured the win for Boise State with just a 26 yard field, but once again he missed.

This is very disappointing end to the Boise State season that literally had them on a path to a potential BCS championship.

Take a look at the first field goal again, no line judges present under the vertical goal posts as required, they are up watching the line of scrimmage. The video evidence is not conclusive to a missed field goal and the ball was above the poles. The BSU team members and staff all swear they saw it go in but only by a few feet, and no ref’s sought for a video replay/confirmation. Coach Pete’s first failure to back his team by requesting review of the footage.