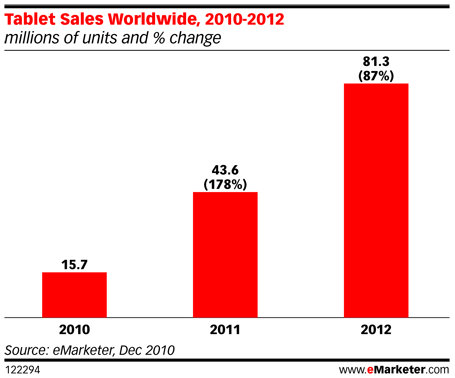 The tablet market is exploding.

But it’s nothing compared to what some experts are predicting in the coming years regarding tablet growth.

With the iPad providing the fuel for the tablet growth of 2010, by 2012, iPad competitors, such as the coming Android tablets, are expected to have picked up steam and contribute to over 81 million tablets selling across the globe.

81.3 million is the expected number of tablet to be sold in 2012 according to a recent article by Mashable.

If this growth prediction holds true, that would mean the tablet market is set to grow by a whopping 400% over the next 2 years – something I can easily see happening, and perhaps even these figures are low estimates of what we could actually see.