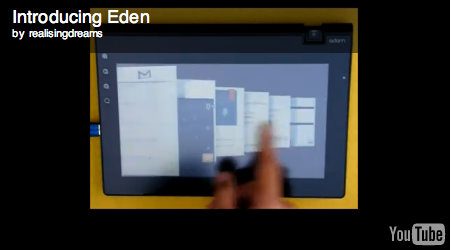 Founder and CEO of Notion Ink, Rohan Shravan, couldn’t wait any longer listening to all of the rumors and gossip surrounding their 10 inch Adam Android tablet. The Adam is a 10-inch tablet starting at $375.33, and runs on a customized Eden UI which combines elements from Android 2.3 and 3.0.

Pre-orders for the Adam Android tablet began two weeks ago, yet a shipping date has yet to be confirmed.

The original plan of Shravan was to launch the Adam tablet at CES which takes place from January 6 – January 9, 2011:  ,”CES is where we intended to demo, show everything and allow for review, else there is no point for a good CES event” but as commenters and reporters became increasingly antagonistic and dubious about its existence at all, Shravan agreed to release an “in-depth video” on December 18th.

The Adam Android tablet is being touted as the closest iPad killer to date.

Right – for some reason I doubt that, and I expect we’ll hear that a whole lot more of the same talk as 2011 progresses.

Here’s the video (without words) of the Adam Android tablet: