Yesterday, at around 12pm EST, Goldman Sachs shares (NYSE:GS) plummeted as the news about Facebook stock trading made it’s way into the mainstream.

Goldman Sachs Group Inc. has been aggressively pitching as much as $1.5 billion in Facebook shares to wealthy investors, while simultaneously disclosing they might sell or hedge its own $375 million investment in the social network without any warnings to clients.

Is this not a double standard, hypocritical position to take, especially in light of the fact that you (Goldman Sachs) are trying to push nearly $1.5 billion in Facebook shares to wealthy investors?

Wow… not good for the already tarnished reputation, and integrity, of Goldman Sachs. 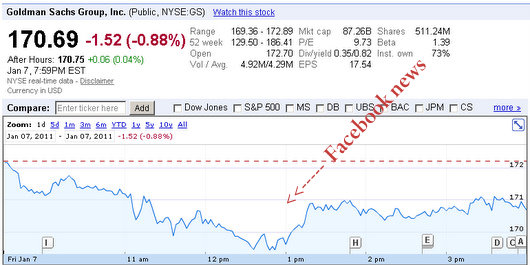