Verizon announced the iPhone today at a press conference in New York City, and Verizon’s stock price has been falling ever since.

Sure, back in 2007 the iPhone was a revolutionary product and smartphone concept.

Just like the iPad is a today – the iPad has basically created a new paradigm in personal computing.

But the iPhone is… well… old technology in my opinion – and Verizon’s stock price (NYSE:VZ) might just confirm that theory.

Verizon shares have been dropping since they opened this morning (see chart below), and investors were well aware of the press conference today to announce the iPhone.

Now that the press conference is over, Verizon shares are down over 2% on the NYSE.

I believe investors see the iPhone as old technology.

That might sound harsh to some people, I know, but look at the reality of the smartphone marketplace.

And we have LTE technology.

And not to mention all of the 4G speed Android smartphones.

C’mon man… you have to admit that the iPhone has been making it’s money on technology that is now 3 years old.

So I’m really thinking that the iPhone is no longer as impressive to investors as it was three years ago – in fact, Verizon’s stock price confirms that.

Technology moves fast, and even Apple isn’t exempt from having to keep up with the latest technology. 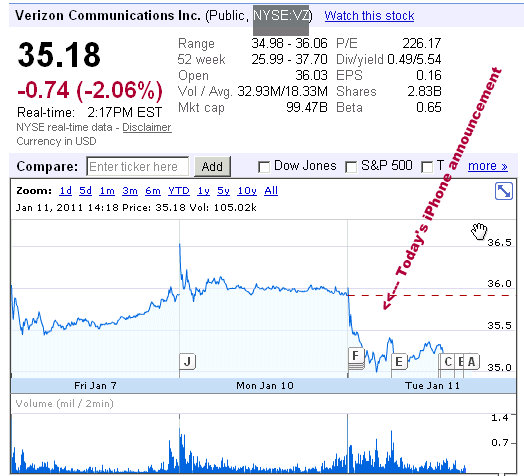 4 replies on “The iPhone Is Old Technology, That’s Why Verizon Shares Are Down”

It’s still surprising. Motorola is carrying Verizon right now and put on an impressive show for CES. At the same time ATT is doing the right thing by snatching up all those high-end Android phones. I believe Verizon will still see a significant influx of customers for the CDMA iPhone.

Fair points – but what most people don’t realize is that Verizon is going to
have to pay Apple approximately $400 for every iPhone purchased – which is
part of the subsidy agreement between Verizon and Apple.

This leaves the profit margin up to the data network, and the iPhone is only
the older 3G technology, not the LTE 4G that Verizon is pushing with the
high end Android smartphones.