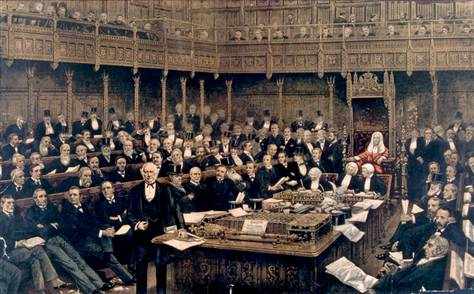 This is a great idea, in my opinion!

The British Parliament is getting ready to vote on the issue of allowing politicians to use Twitter actively during debate sessions in the House of Commons.  In my opinion, Twitter facilitates instant feedback from constituents that could be invaluable to politicians who are having debates on the very laws that will govern the people. This real time feedback can help the politicians in parliament understand their constituents better, and represent their views and opinions more effectively during debate.

A new report from the Parliament Procedure Committee favors the Members of Parliament using microblogging service Twitter during debates says this,

“Finally, it has to be acknowledged that electronic devices are ubiquitous now in a way that even four years ago was not the case. Banning them from the chamber might make the House appear out of touch with modern life and would mean that those in the chamber would be the last to know of breaking news widely available on the internet,” the report said.

“We therefore conclude that Members should be allowed to use electronic hand-held devices for any purpose when in the chamber whilst not speaking, and that the current ban on the use of hand-held electronic devices as an aide memoire, whilst speaking in a debate, should be ended.”

What do you think about this issue?

Should politicians be allowed to use Twitter during debates in the House of Commons?

U.S. politicians use Twitter frequently. Exactly how much is utilized during debates in Congress is something I’m not sure about, but obviously U.S. politicians see its value to communicate and receive feedback from constituents.