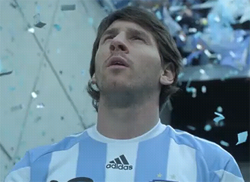 It’s only taken about 7 hours, but Argentine soccer great Leo Messi has achieved something that no one else in the history of Facebook has ever achieved – nearly 7 million fans in 7 hours.

Messi is known in some circles as the great soccer player in the world, and had this to say (translated) via his new Facebook page:

“Hola! Welcome to everyone. Thank you very much for the great number of messages that I have received. I am so excited! From now on we will be more closely connected … through Facebook.”

He went on to say “as it is difficult to tell you what it’s like during a game, I am sharing with you this video from Adidas that shows the passion and the emotions I feel on the pitch.”