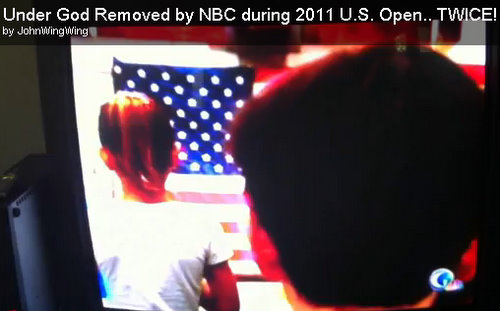 During NBC’s coverage of the U.S. Open golf tournament, a video was played that featured the reciting of The United States Pledge of Allegiance. Ironically, during the video segment, “Under God” was omitted twice – and during the second omission, the phrase “one nation” was also omitted.

This instantly caught the attention of the Twittersphere where rage, discussion, and commentary erupted.

Here it is, the NBC video that caused all the controversy:


According to Mashable, the TV network apologized later in the broadcast for offending anyone by omitting the phrase, without mentioning which words were left out. Said NBC announcer Dan Hicks, “Regrettably, a portion of the Pledge of the Allegiance that was in that feature was edited out. It was not done to upset anyone and we’d like to apologize to those of you that were offended by it.”

One reply on “NBC Edits Out “Under God” From ‘U.S. Pledge of Allegiance’ Twitter Erupts”

I would really, really, like the person who edited out the “Under God” part, and the person who ordered it edited out to step forward and identify themselves to America,  Fat chance.  These weasels will stay in their cowardly holes forever.