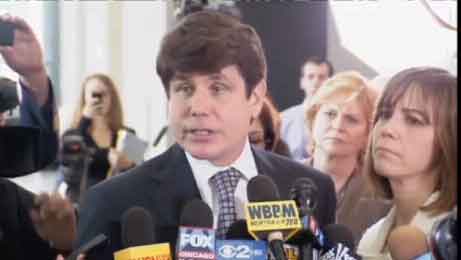 The time for former Illinois Governor Rod R. Blagojevich to pay the piper has finally come.  The court room, including Blagojevich himself, were stunned when the former governor was convicted on 17 counts of corruption, to include trying to sell the Senate seat that was held by President Barack Obama.

Here’s what Blagojevich has to say on the courthouse steps while holding his wife’s hand:  “Patti and I obviously are very disappointed in the outcome,” he said. “I, frankly, am stunned. There’s not much left to say other than we want to get home to our little girls and talk to them and explain things to them and try to sort things out. And I’m sure we’ll be seeing you.”