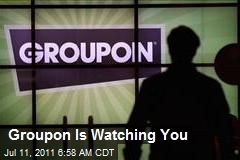 Groupon made an update to their privacy policies last week where they will begin collecting more information about users of the group buying site to share with business partners.

Groupon also stated in their new privacy policy that they will use geo-locational information to market its online deals to users.

All of the above has now gained the attention of law markers in Washington who have now requested direct information from Groupon regarding this matter.

According to the Washington Post, Reps. Ed Markey (D-Mass.) and Joe Barton (R-Tex.) have sent a letter to Groupon asking for more information on changes it made to its privacy policy to share demographics, social and geolocation data with its business partners.

“According to the article, Groupon will dramatically expand the categories of personal information it collects and shares with its partners,” Markey and Barton wrote. “As co-chairmen of the bi-partisan Congressional Privacy Caucus, we would like to gain greater insight into Groupon’s privacy policies.”