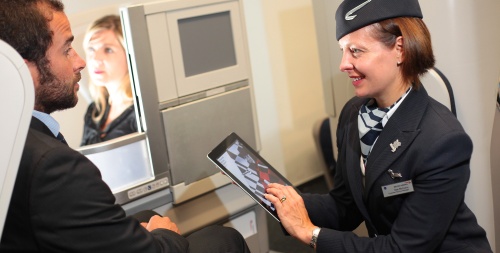 British Airways is currently testing iPad usage with flight attendants, hoping that iPads will allow attendants to be more responsive to flyer’s needs, and more knowledgeable about who’s on the flight.

The airline industry is moving quickly to adopt the latest technology and gadgets to not only allowing frequent flyers to have a better experience, but also to equip crew members with tools to be better informed about who’s on the flights.

British Airways has been testing the iPad with their in-flight attendants to see if the iPad will help them be more informed about who’s flying, and help them serve the customers better while in flight.

The iPads allow the flight attendants to know information on travelers, including their location on the plane, Executive Club status, previous travel arrangements, travel companions, special meal requests and other preferences.  The iPads also come preloaded with airline documents, safety manuals, and schedules for crew members.

Because of the success so far with testing the iPad with flight attendants, British Airways is planning to distribute iPads to all senior crew members.  And with the airline having 3G wireless access, the iPads can be humming away with continually data access.