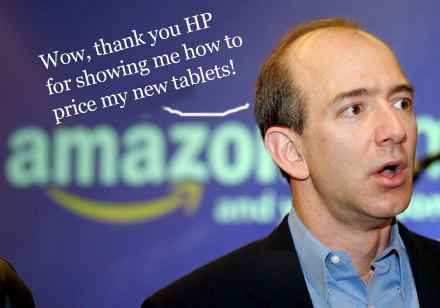 Let’s go back two weeks from today, shall we?

The HP TouchPad was tanking because nobody wanted to spend $300 or $400 on a tablet when they could use that same amount of money to be an iPad.  Let’s be honest here…

And so HP, after sales continued to nose dive, threw in the towel on the tablet front and literally overnight, killed the WebOS strategy.

So now HP has these warehouses full of TouchPads and they’re freaking out over what in the world to do with all of them.   Dropping the price made sense, so they came out and dropped the price in order to start clearing them out of inventory.

But things were necessarily clearing out as quickly as HP would like, so they decided to drop the price even more to $99 for the 16GB model and $149 for the 32GB model.

And then guess what happened…???

It was as if Apple just released a brand new iPad.  Lines formed around city blocks.  The HP TouchPad was selling out of stock in less than 5 minutes in WalMart.  Chaos was unfolding because now, all of sudden, everyone wanted the HP TouchPad.

But wait a minute.  Isn’t this the same TouchPad that a few weeks ago was selling so bad that HP decided to kill the program altogether?

So what, all of a sudden, put the demand for the HP TouchPad on the same level – or even a higher level from a demand standpoint – than the iPad?

The TouchPad drops to $99 and now, suddenly, the stores can’t stock the tablet fast enough.

This is something, I know for a fact, that Jeff Bezos and the Amazon crew are taking note of.  Mr. Bezos and his generals are all sitting around the tablet saying, “will you look at that?  look at what happened when HP dropped that price down to $99 – the supply could no longer meet demand…. that’s exactly what we need to happen with our new Amazon Android tablet.”

Mark my words.  When the Amazon Android tablet finally does hit the market, I guarantee the price will be substantially lower than any other tablet on the market.  And I would almost guarantee we’ll see a 10.1 inch Amazon tablet.

Amazon is all about selling a ridiculous amount of product, especially product they invented, like the Kindle which is now the #1 best selling item on Amazon of all time.