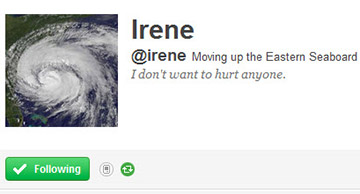 Well, if you were wanting to keep updated on the status of Hurricane Irene, why not just follower her on Twitter?

That’s right folks, now even a hurricane can have their own Twitter account.  You can follow @irene and keep updated as the Hurricane makes its way up the east coast.

Now who exactly is behind the Hurricane Irene Twitter account is unknown, but about 9:30pm tonight, they said they needed a break from tweeting… that was their last update.