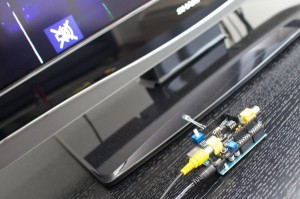 If you’re like Matt Richardson and are sick of hearing annoying celebrities like Snooky blabber nonsense on TV then you would love his hacked TV remote invention.  He explains in a recent article that he invented an auto-mute TV remote that’s hacked to automatically mute your TV when it hears a keyword.

“A while ago it was Charlie Sheen. And then it was Sarah Palin. And then it was Donald Trump,” said Richardson, who is a video producer for Make Magazine. “And after a while I realized there’s sort of always someone who I don’t really want to hear about.”

Richardson combined a couple of Arduino circuit boards with an infrared LED light — that little red bubble on the front of your TV remote — and programmed the whole thing to interact with a TV’s closed-captioning system.

As long as that person’s name keeps coming up, the remote keeps muting the TV. The first time he got it to work, Richardson said he “was in silent bliss for that 30 seconds I didn’t have to hear about Kim Kardashian.”

He explains the remote in detail in his blog post.  Although it’s not 100% accurate an may miss the first reference at times, user’s are already thinking about inventive ways to use Matt’s Enough Already Auto-Mute Remote.

“You could generate the list of key words dynamically. E.g., by monitoring Twitter’s trending topics or by parsing Google’s zeitgeist lists,” one reader suggests.

One user has a great idea for a college drinking game:

“Back in my college days we had a drinking game based on the Bob Newhart Show. Every time someone said his name (Bob) everyone had to take a shot and if they said Robert (usu. only his Dad) it was a 2 shots deal. You’d get rather toasted before first commercial so it tended to end there.

So monitor the feed for ‘Bob” and then sound off a buzzer or bell circuit instead of IR LED. Have simple box with bell/light or ????. “